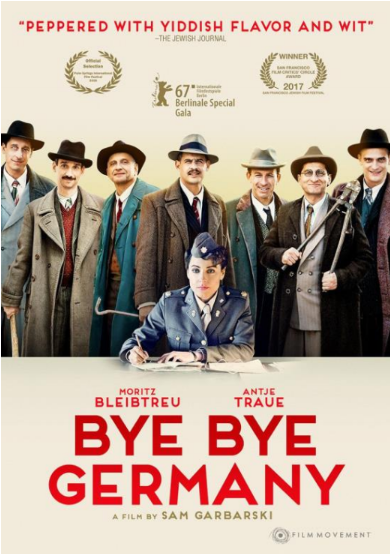 A defiant Holocaust survivor looks to strike it rich in postwar Frankfurt, in BYE BYE GERMANY, a brisk, polished drama tempered with bittersweet humor. Though haunted by his family’s murder at Auschwitz, hustler David Bermann (Bleibtreu) is determined to eke out a living in his battle-scarred homeland. He recruits other survivors, who are longing for nothing more than to earn enough money to quit Germany for the good life in America.

They become Jewish traveling salesmen to a shady scheme: selling overpriced linens door-to-door to guilt-ridden Germans who seemingly can’t pay enough to overcome their own perceived complicity in the atrocities of the war. Meantime, he faces interrogation by a beautiful American military intelligence officer about his past as an alleged Nazi collaborator during his time in the camps. She remains unconvinced of his innocence as he spins a tale, a la Scheherazade but day by day, of his activities at the whims of the SS. “With a jaunty klezmer-style score and Yiddish-inflected dialogue, this fresh historical perspective is an utterly engaging salute to European Jews who chose to tough out painful memories to reclaim their lives.”